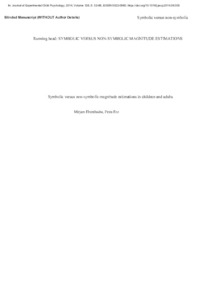 Symbolic versus non-symbolic magnitude estimations among children and adults

Manuscript
The conduct of this study was supported by a grant from the Deutsche Forschungsgemeinschaft (DFG, EB462/1-1) to the first author