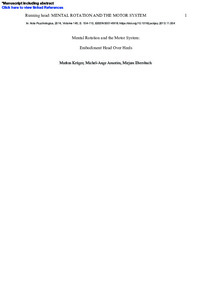 Mental rotation and the motor system: Embodiment head over heels

We examined whether body parts attached to abstract stimuli automatically force embodiment in a mental rotation task. In Experiment 1, standard cube combinations reflecting a human pose were added with (1) body parts on anatomically possible locations, (2) body parts on anatomically impossible locations, (3) colored end cubes, and (4) simple end cubes. Participants (N = 30) had to decide whether two simultaneously presented stimuli, rotated in the picture plane, were identical or not. They were fastest and made less errors in the possible-body condition, but were slowest and least accurate in the impossible-body condition. A second experiment (N = 32) replicated the results and ruled out that the poor performance in the impossible-body condition was due to the specific stimulus material. The findings of both experiments suggest that body parts automatically trigger embodiment, even when it is counterproductive and dramatically impairs performance, as in the impossible-body condition. It can furthermore be concluded that body parts cannot be used flexibly for spatial orientation in mental rotation tasks, compared to colored end cubes. Thus, embodiment appears to be a strong and inflexible mechanism that may, under certain conditions, even impede performance.