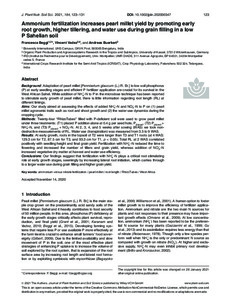 Background: Adaptation of pearl millet [Pennisetum glaucum (L.) R. Br.] to low soil phosphorus (P) at early seedling stages and efficient P fertilizer application are crucial for its survival in the West African Sahel. While addition of NH+4-N to P in the microdose technique has been reported to stimulate early growth of pearl millet, there is little information regarding root length (RL) at different timings.
Aims: Our study aimed at assessing the effects of added NH+4-N and NO−3-Nto P on (1) pearl millet agronomic traits such as root and shoot growth and (2) the water use dynamics during the cropping cycle.
Methods: Twenty‐four “RhizoTubes” filled with P‐deficient soil were used to grow pearl millet under three treatments: (T1) placed P addition alone at 0.4 g per seed hole, Pplaced, (T2) Pplaced + NH+4-N, and (T3) Pplaced + NO−3-N. At 2, 3, 4, and 5 weeks after sowing (WAS) we took non‐destructive measurements of RL. Water use (transpiration) was measured from 3.5 to 9 WAS.
Results: At early growth, roots in the topsoil of T2 were longer than T3 and T1 roots (at 4 WAS: 129.3 cm for T2, 87.5 cm for T3, and 93.3 cm for T1, p < 0.05). Total RL at 2 WAS correlated positively with seedling height and final grain yield. Fertilization with NH+4-N reduced the time to flowering and increased the number of tillers and grain yield, whereas addition of NO−3-N increased vegetative dry matter at harvest and water use efficiency.
Conclusions: Our findings suggest that fertilization with NH+4-N plays a critical root stimulating role at early growth stages, seemingly by increasing lateral root initiation, which carries through to a larger water use during grain filling and higher grain yield.