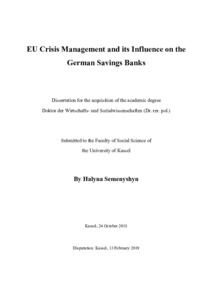 EU Crisis Management and its Influence on the German Savings Banks

European financial architecture has been rapidly changing since the outburst of the global financial crisis in 2008. On one hand, it sparked academic discussions about the European Union (EU) integration and the future of the EU project, on the other hand, it urged the EU member states and policymakers to deal with the consequences of the crisis. The eurozone crisis has also left its imprint on the European regulatory landscape. Since 2012, the European Commission (EC) has resumed its single financial market agenda and proposed the creation of the banking union. By analysing the European financial market integration, first, I trace the emergence of the banking union and, second, reflect on its implications on the German savings banks. In this dissertation, I seek to answer the following questions: how are savings banks responding to the new challenges of the supranational financial regulatory policymaking processes, and what position are they taking against the banking union project in the political struggles within the EU, and why.
The proposal of the banking union has been the most contested during the process of crisis management. By 2014, the first steps towards harmonizing the regulation and supervision of bank activities in the EU had been realized in two pillars of the banking union—the Single Supervisory Mechanism (SSM) and the Single Resolution Mechanism (SRM). The third pillar, proposed by the EC, a Euro-wide Deposit Insurance Scheme (EDIS), is currently being negotiated amongst the EU member states. The negotiations on this third pillar stumbled on the opposition from Germany, thus it has become central in the conflict over EU market integration. In this line, the main question posed by the research has been why the traditional model of public savings banks is becoming marginalized in the EU financial regulations even though it has proven to be stable. The identity of the savings bank model, which is perceived differently in the national and European context, sheds light in this regard. While it is still strong in Germany by securing support from the German banking industry, it loses its discursive power at the European level. Ultimately, the lack of understanding of the savings bank model, which is able to protect savings banks via the Institutional Protection Scheme (IPS), makes them policy-takers rather than policymakers in the European financial domain. The project remains an uncomfortable compromise, not only because of German opposition to the mutual support for the banks throughout the eurozone, but also because it ignores the complexity of the banking systems in each member state and their role in national economies. Thus, savings banks are pleading for fragmented oversight regulation and preservation of their own protective system. Overall, the banking union forced savings banks to employ defensive strategies in order to protect their business model, even though they were minimally exposed to the threats of the international financial crisis and were able to restore consumer confidence in the performance of financial markets (DSGV, 2010a). Still, finding allies to support their own model and winning a position as an alternative banking type on the EU level has been a challenging task for savings banks.