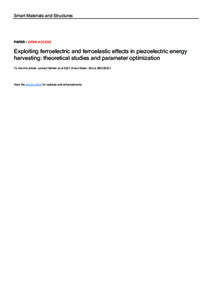 While piezoelectric energy harvesting typically focuses on converting mechanical into electrical energy on the basis of the linear reversible piezoelectric effect, the potential of exploiting the non-linear ferroelectric effect is investigated theoretically in this paper. Due to its dissipative nature, domain switching, on the one hand, is basically avoided in order to prevent mechanical energy from being converted into heat. However, the electrical output, on the other hand, is augmented due to the increased change of electric displacement. In view of these conflicting issues, one main objective in ferroelectric energy harvesting thus is to identify mechanical and electrical process parameters providing appropriate figures of merit. Being an efficient approach to numerically simulate multiphysical polycrystalline material behavior, the so-called condensed method is taken as a basis for the investigation and finally optimization of controllable parameters of ferroelectric energy harvesting cycles. A first idea of a technical implementation taken from literature is considered as cycle of reference, constituting the starting point of the present study, being focused on material aspects rather than on harvesting devices. Different quality assessing parameters are introduced, taking into account general aspects of harvesting efficiency as well as the ratio of irreversible switching-related to reversible piezoelectric contributions. Residual stresses are likewise predicted to give an idea of reliability and the risk of fracture. Two types of cycles and associated optimal process parameters are finally presented.