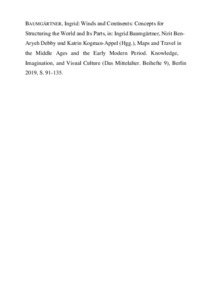 Winds and Continents: Concepts for Structuring the World and Its Parts

The present essay is an attempt to show how and why winds and geographic entities, originally referred to as the parts of the earth and only later as continents, became important for the perception of the structure of the world. My starting point is Burchard of Mount Zion’s travel report ‘Descriptio terrae sanctae’, written between 1274 and 1285, which was based on these two concepts. Versions of that report, which circulated from the fourteenth to the sixteenth century, were adorned with various illustrations. I explore the ways in which these cultural concepts developed into wellknown cartographic and textual motifs by means of several examples from medieval cartography and travel literature. I also discuss how their meaning and forms of representation have changed. In order to do so, I first address the abstract ideas that appear in illustrated copies of travel reports such as Burchard’s ‘Descriptio’. I then analyse the correlation and development of the four- and threefold concepts of the world and examine the different wind systems with eight or twelve rays as structural elements of texts and images.