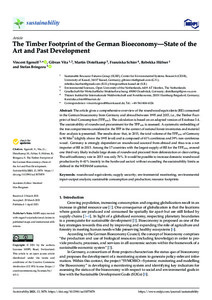 The article gives a comprehensive overview of the roundwood equivalents (RE) consumed in the German bioeconomy from Germany and abroad between 1995 and 2015, i.e., the Timber Footprint of final Consumption (TFPcon). The calculation is based on an adapted version of Exiobase 3.4. The sustainability of roundwood procurement for the TFPcon is assessed. A systematic embedding of the tree compartments considered in the TFP in the context of national forest inventories and material flow analysis is presented. The results show that, in 2015, the total volume of the TFPcon of Germany is 90 Mm3 (slightly above the 1995 level) and is composed of 61% coniferous and 39% non-coniferous wood. Germany is strongly dependent on roundwood sourced from abroad and thus was a net importer of RE in 2015. Among the 17 countries with the largest supply of RE for the TFPcon, around one third very likely include large shares of roundwood procured from deforestation or clear-cutting. The self-sufficiency rate in 2015 was only 76%. It would be possible to increase domestic roundwood production by 8–41% (mainly in the hardwood sector) without exceeding the sustainability limits as defined in the WEHAM scenarios.