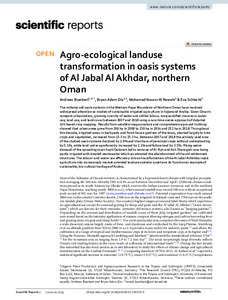 The millenia-old oasis systems in the Western Hajar Mountains of Northern Oman have received widespread attention as models of sustainable irrigated agriculture in hyperarid Arabia. Given Oman’s rampant urbanization, growing scarcity of water and skilled labour, we quantified chances in water use, land use, and land cover between 2007 and 2018 using a rare time-series approach of detailed GIS-based crop mapping. Results from satellite image analysis and comprehensive ground truthing showed that urban areas grew from 206 ha in 2009 to 230 ha in 2014 and 252 ha in 2018. Throughout this decade, irrigated areas in backyards and front-house gardens of the town, planted largely to tree crops and vegetables, increased from 13.5 to 23.3 ha. Between 2007 and 2018 the actively used area of the studied oasis systems declined by 2.0% and the share of perennial crops without underplanting by 5.1%, while land under agroforestry increased by 2.1% and fallow land by 3.5%. Rising water demand of the sprawling town Sayh Qatanah led to terraces of Al ‘Ayn and Ash Sharayjah now being partly irrigated with treated wastewater which accelerated the abandonment of the old settlement structures. The labour- and water use efficiency-driven transformation of the Al Jabal Al Akhdar oasis agriculture into increasingly market-oriented landuse systems questions its function as example of sustainable, bio-cultural heritage of Arabia.