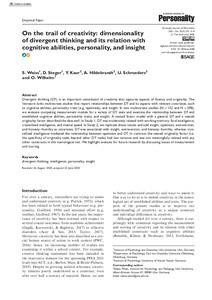 On the Trail of Creativity: Dimensionality of Divergent Thinking and its Relation with Cognitive Abilities, Personality, and Insight

Divergent thinking (DT) is an important constituent of creativity that captures aspects of fluency and originality. The literature lacks multivariate studies that report relationships between DT and its aspects with relevant covariates, such as cognitive abilities, personality traits (e.g. openness), and insight. In two multivariate studies (N = 152 and N = 298), we evaluate competing measurement models for a variety of DT tests and examine the relationship between DT and established cognitive abilities, personality traits, and insight. A nested factor model with a general DT and a nested originality factor described the data well. In Study 1, DT was moderately related with working memory, fluid intelligence, crystallized intelligence, and mental speed. In Study 2, we replicate these results and add insight, openness, extraversion, and honesty–humility as covariates. DT was associated with insight, extraversion, and honesty–humility, whereas crystallized intelligence mediated the relationship between openness and DT. In contrast, the nested originality factor (i.e. the specificity of originality tasks beyond other DT tasks) had low variance and was not meaningfully related with any other constructs in the nomological net. We highlight avenues for future research by discussing issues of measurement and scoring.