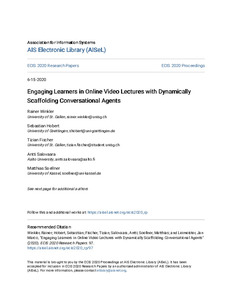 Online education creates new opportunities for learners, which has led to sharply increasing enrollment in the last few years. Despite these benefits, past research shows that the lack of individual interaction with educators creates low learner engagement that leads to high attrition rates, which remains a major challenge in the field. Dynamically scaffolding conversational agents built into online video lectures promise to address this problem by individually interacting with learners, similar to educators’ scaffolding behavior. These agents are equipped with recent natural language processing capabilities, creating human-like conversations that help learners to be more engaged in the learning process. To test our hypothesis, we built a dynamically scaffolding conversational agent named Sara and compared it with an often implemented static conversational agent built into two online video lectures. We deployed a lab experiment with 182 learners. The neurophysiological measurements revealed that Sara significantly improved learner engagement partly explained by differences in learners’ perceptions in the way they experienced the interaction. This study connects to already existing conversational agent studies in online education and highlights the importance of including dynamically scaffolding conversational agents in online video lectures to address the problem of low learner engagement in online education.