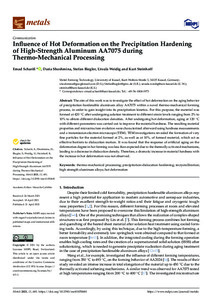 The aim of this work was to investigate the effect of hot deformation on the aging behavior of precipitation-hardenable aluminum alloy AA7075 within a novel thermo-mechanical forming process, in order to gain insight into its precipitation kinetics. For this purpose, the material was formed at 420 °C after undergoing solution treatment to different strain levels ranging from 2% to 10% to obtain different dislocation densities. After undergoing hot deformation, aging at 120 °C with different parameters was carried out to improve the material hardness. The resulting material properties and microstructure evolution were characterized afterward using hardness measurements and a transmission electron microscope (TEM). TEM investigations revealed the formation of very fine particles for the material formed at 2%, as well as at 10%, of formed material, which act as effective barriers to dislocation motion. It was found that the response of artificial aging on the deformation degree in hot forming was less than expected due to the thermally activated mechanisms, leading to a decrease in dislocation density. Therefore, a dramatic increase in material hardness with the increase in hot deformation was not observed.