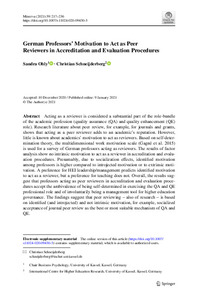 Acting as a reviewer is considered a substantial part of the role-bundle of the academic profession (quality assurance (QA) and quality enhancement (QE) role). Research literature about peer review, for example, for journals and grants, shows that acting as a peer reviewer adds to an academic’s reputation. However, little is known about academics’ motivation to act as reviewers. Based on self-determination theory, the multidimensional work motivation scale (Gagné et al. 2015) is used for a survey of German professors acting as reviewers. The results of factor analysis show no intrinsic motivation to act as a reviewer in accreditation and evaluation procedures. Presumably, due to socialization effects, identified motivation among professors is higher compared to introjected motivation or to extrinsic motivation. A preference for HEI leadership/management predicts identified motivation to act as a reviewer, but a preference for teaching does not. Overall, the results suggest that professors acting as peer reviewers in accreditation and evaluation procedures accept the ambivalence of being self-determined in exercising the QA and QE professional role and of involuntarily being a management tool for higher education governance. The findings suggest that peer reviewing – also of research – is based on identified (and introjected) and not intrinsic motivation, for example, socialized acceptance of journal peer review as the best or most suitable mechanism of QA and QE.