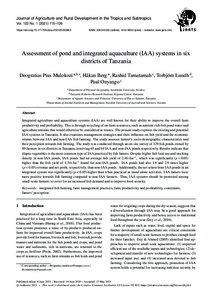 Integrated agriculture and aquaculture systems (IAA) are well known for their ability to improve the overall farm productivity and profitability. This is through recycling of on-farm resources, such as nutrient rich fish pond water and agriculture remains that would otherwise be considered as wastes. The present study explores the existing and potential IAA systems in Tanzania. It also examines management strategies and their influence on fish yield and the economic returns between IAA and non-IAA fish farming. The study assesses farmer’s socio-demographic characteristics and their perception towards fish farming. The study was conducted through an on-site survey of 129 fish ponds owned by 89 farmers in six districts in Tanzania, involving 65 and 64 IAA and non-IAA ponds respectively. Results indicate that tilapia-vegetables is the most common type of IAA practiced by fish famers. Despite higher fish feed use and stocking density in non-IAA ponds, IAA ponds had an average fish yield of 2.46 t ha�����1, which was significantly (p < 0:05) higher than the fish yield of 1.54 t ha�����1 found for non-IAA ponds. IAA ponds had also 1.6 and 2.9 times higher (p < 0:05) revenue and net profit, respectively, than non-IAA ponds. Additionally, the net return from IAA ponds in an integrated system was significantly (p < 0:05) higher than when practiced as stand-alone activities. IAA famers were more positive towards fish farming compared to non-IAA farmers. Thus, IAA systems should be promoted among small-scale farmers to cover for an increased fish demand and to improve food security.