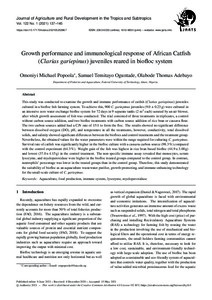 This study was conducted to examine the growth and immune performance of catfish (Clarias gariepinus) juveniles cultured in a biofloc fish farming system. To achieve this, 900 C. gariepinus juveniles (9.0 ± 0.23 g) were cultured in an intensive zero water exchange biofloc system for 72 days in 9 separate tanks (2 m3 each) aerated by an air blower, after which growth assessment of fish was conducted. The trial consisted of three treatments in triplicates, a control without carbon source addition, and two biofloc treatments with carbon source addition of rice bran or cassava flour. The two carbon sources added had a C/N rate of 15:1 to form the floc. The results showed no significant difference between dissolved oxygen (DO), pH, and temperature in all the treatments, however, conductivity, total dissolved solids, and salinity showed significant differences between the bioflocs and control treatments and the treatment group. Nevertheless, the obtained values for the water parameters were within the range required for culturing C. gariepinus. Survival rate of catfish was significantly higher in the biofloc culture with a cassava carbon source (98.3 %) compared with the control experiment (64.3 %). Weight gain of the fish was highest in rice bran based biofloc (44.9 ± 3.00 g) and lowest (37.0 ± 4.15 g) in the control treatment. The non-specific immune assay revealed that monocytes, serum lysozyme, and myeloperoxidase were higher in the biofloc treated groups compared to the control group. In contrast, neutrophils’ percentage was lower in the treated groups than in the control group. Therefore, this study demonstrated the suitability of biofloc as an aquaculture wastewater purifier, growth-promoting, and immune-enhancing technology for the small-scale culture of C. gariepinus.