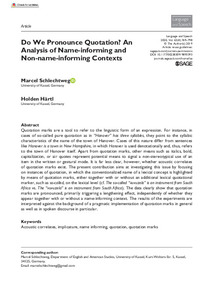 Quotation marks are a tool to refer to the linguistic form of an expression. For instance, in cases of so-called pure quotation as in “Hanover” has three syllables, they point to the syllabic characteristics of the name of the town of Hanover. Cases of this nature differ from sentences like Hanover is a town in New Hampshire, in which Hanover is used denotationally and, thus, refers to the town of Hanover itself. Apart from quotation marks, other means such as italics, bold, capitalization, or air quotes represent potential means to signal a non-stereotypical use of an item in the written or gestural mode. It is far less clear, however, whether acoustic correlates of quotation marks exist. The present contribution aims at investigating this issue by focusing on instances of quotation, in which the conventionalized name of a lexical concept is highlighted by means of quotation marks, either together with or without an additional lexical quotational marker, such as so-called, on the lexical level (cf. The so-called “vuvuzela” is an instrument from South Africa vs. The “vuvuzela” is an instrument from South Africa). The data clearly show that quotation marks are pronounced, primarily triggering a lengthening effect, independently of whether they appear together with or without a name-informing context. The results of the experiments are interpreted against the background of a pragmatic implementation of quotation marks in general as well as in spoken discourse in particular.