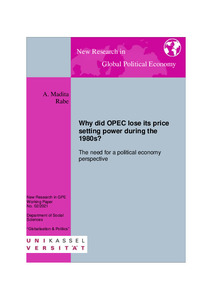 Why did OPEC lose its price setting power during the 1980s?
The need for a political economy perspective

Since the surge in oil prices during the 1970s there was an increased academic interest in explaining the formation of oil prices and the critical role played by OPEC in this process. A variety of economic models were established to explain the rise of price setting power by OPEC reflected in the massive price increases. During the 1980s, however, against many projections, the surge in oil prices came to a hold and from the 1980s on started to decrease, finally collapsing in 1986 to an unprecedented low. These developments were surprising to many observers and theorists struggled to explain what happened. The paper looks at this phenomenon of the decline of OPEC by posing the question ‘why did OPEC lose its price setting power during the 1980s?’. I argue that economic approaches alone are inadequate to explain the collapse of OPEC’s price setting power during this phase and demonstrate the need for a broader political economy approach which incorporates historic, political and economic aspects in the analysis. The paper accounts for the historic background of the emergence of OPEC and the political complexity on a global scale. This, I propose, allows for the power relations to enter the analysis, which are inevitably present within the global context of oil markets. This is because, first, due to the high dependence of the world economy on oil, the relations of global supplies are power-laden, and second, because OPEC from the very beginning was a political organization aiming to confront the US domination within a context characterized by colonial legacies. I outline a political economy approach to the phenomenon, which expands the view of the economic approaches by the importance of the political and historic aspects and as such allows for the analysis of global power-relations. I show that via this approach strategies of the Western powers to confront the power challenges of OPEC can be determined, which in turn had a significant impact on the decline of OPEC’s price setting power by undermining Western demand for OPEC oil.