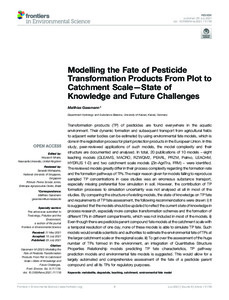 Transformation products (TP) of pesticides are found everywhere in the aquatic environment. Their dynamic formation and subsequent transport from agricultural fields to adjacent water bodies can be estimated by using environmental fate models, which is done in the registration process for plant protection products in the European Union. In this study, peer-reviewed applications of such models, the model complexity and their structure are documented and analysed. In total, 20 publications of 10 models – eight leaching models (GLEAMS, MACRO, RZWQM2, PEARL, PRZM, Pelmo, LEACHM, HYDRUS 1-D) and two catchment scale models (Zin-AgriTra, FRM) – were identified.
The reviewed models greatly differ in their process complexity regarding the formation rate and the formation pathways of TPs.The major reason given for models failing to reproduce sampled TP concentrations in case studies was an erroneous substance transport, especially missing preferential flow simulation in soil. However, the contribution of TP formation processes to simulation uncertainty was not analysed at all in most of the studies. By comparing the structure of existing models, the state of knowledge on TP fate and requirements of TP fate assessment, the following recommendations were drawn: i) It is suggested that the models should be updated to reflect the current state of knowledge in process research, especially more complex transformation schemes and the formation of different TPs in different compartments, which was not included in most of the models. ii) Even though there are pesticide parent compound fate models at the catchment scale with a temporal resolution of one day, none of these models is able to simulate TP fate. Such models would enable scientists and authorities to estimate the environmental fate of TPs at the larger catchment scale or the regional scale. iii) To get over the assessment of the huge number of TPs formed in the environment, an integration of Quantitative Structure Properties Relationship models predicting TP fate characteristics, TP pathway prediction models and environmental fate models is suggested. This would allow for a largely automated and comprehensive assessment of the fate of a pesticide parent compound and all its TPs for regulatory purposes.