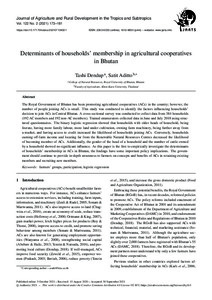 Determinants of households’ membership in agricultural cooperatives in Bhutan

The Royal Government of Bhutan has been promoting agricultural cooperatives (ACs) in the country; however, the number of people joining ACs is small. This study was conducted to identify the factors influencing households' decision to join ACs in Central Bhutan. A cross-sectional survey was conducted to collect data from 384 households (192 AC members and 192 non-AC members). Trained enumerators collected data in June and July 2018 using structured questionnaires. The binary logistic regression showed that households with older heads of household, being literate, having more family labour, more land under cultivation, owning farm machinery, being further away from a market, and having access to credit increased the likelihood of households joining ACs. Conversely, households earning off-farm income and locating far from the Renewable Natural Resources Centres decreased the likelihood of becoming member of ACs. Additionally, the gender of the head of a household and the number of cattle owned by a household showed no significant influence. As this paper is the first to empirically investigate the determinants of households’ membership in ACs in Bhutan, the findings have some important policy implications. The government should continue to provide in-depth awareness to farmers on concepts and benefits of ACs in retaining existing members and recruiting new members.