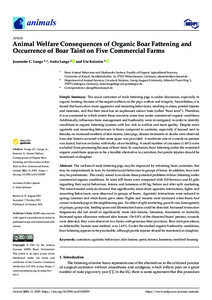 Simple Summary
The usual castration of male fattening pigs is under discussion, especially in organic farming, because of the negative effects on the pig’s welfare and integrity. Nevertheless, it is feared that boars show more aggressive and mounting behaviours, resulting in stress, painful injuries and lameness, and that their meat has an unpleasant odour/taste (called “boar taint”). Therefore, it was examined to which extent these concerns come true under commercial organic conditions. Additionally, influences from management and husbandry were investigated, in order to identify conditions in organic fattening systems with low risk to welfare and meat quality. Despite more agonistic and mounting behaviours in boars compared to castrates, especially if housed next to females, no increased numbers of skin lesions, lame pigs, disease treatments or deaths were observed. Less skin lesions occurred when more space was provided. A moderate rate of wounds on penises was found, but not on farms with bulky straw bedding. A small number of carcasses (1.44%) were excluded from processing because of boar taint. In conclusion, boar fattening under the examined organic conditions appears to be a feasible alternative to castration, but penile injuries should be monitored at slaughter.

Abstract
The welfare of male fattening pigs may be improved by refraining from castration, but may be compromised, in turn, by harmful social behaviour in groups of boars. In addition, boar taint may be problematic. This study aimed to evaluate these potential problems in boar fattening under commercial organic conditions. In total, 625 boars were compared with 433 barrows and 83 gilts regarding their social behaviour, lesions and lameness at 80 kg, before and after split marketing. The mixed-model analysis showed that significantly more short agonistic interactions, fights and mounting behaviours were observed in groups of boars. Agonistic interactions were reduced in spring/summer and when boars grew older. Fights and mounts were increased when boars had contact to female pigs in the neighbouring pen. No effect of split marketing, growth rate, homogeneity of groups, group size, feeding space and illumination hours could be detected. Increased interaction frequencies did not result in significantly more skin lesions, lameness, treatments or mortality. Increased space allowance reduced skin lesions. On 9.8% of the dissected boars’ penises, wounds were detected; they were absent on two farms with generous litter provision. Boar taint prevalence, as detected by human nose method, was 1.44%. Under the studied organic husbandry conditions, boar fattening appears to be practicable, although penile injuries should be monitored at slaughter.