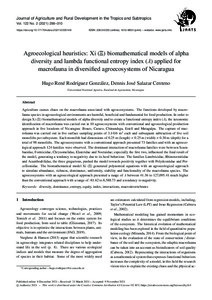 Agriculture causes chaos on the macrofauna associated with agroecosystems. The functions developed by macrofauna species in agroecological environments are harmful, beneficial and fundamental for food production. In order to design Xi (Ξ) biomathematical models of alpha diversity and to create a functional entropy index (λ), the taxonomic identification of macrofauna was carried out in 10 agroecosystems with conventional and agroecological production approach in five locations of Nicaragua: Boaco, Carazo, Chinandega, Estelí and Matagalpa. The capture of macrofauna was carried out in five surface sampling points of 3.1416 m2 each and subsequent subtraction of five soil monoliths per subsystem. Each monolith had dimensions of 0.25 m (length) 0.25 m (width) 0.30 m (depth) for a total of 98 monoliths. The agroecosystems with a conventional approach presented 73 families and with an agroecological approach 124 families were observed. The dominant interaction of macrofauna families were between Scarabaeidae, Formicidae, Chrysomelidae, Elateridae and Noctuidae; especially the first two, influenced the final result of the model, generating a tendency to negativity due to its herd behaviour. The families Lumbricidae, Rhinotermitidae and Acanthodrilidae, the three gregarious, pushed the model towards positivity together with Polydesmidae and Porcellionidae. The biomathematical model Xi () generated polynomial equations with an agroecological approach to simulate abundance, richness, dominance, uniformity, stability and functionality of the macrofauna species. The agroecosystems with an agroecological approach presented a range of between 41.36 to 127,095.41 much higher than the conventional approach with a range of -81.62 to 8,588.73 and a tendency to negativity.