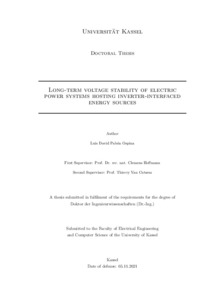 The study of power system dynamics refers to the motion of electro-mechanical and electro-magnetic quantities such as voltages, currents, rotational speeds, angles and powers under the action of forces caused by system disturbances. For decades, such dynamics have been extensively dominated by large Synchronous Generators (SGs). Not a surprising statement, considering that the power systems that we know today were built based on the SG concept since the closing decades of the 19th century. It all began in 1891, when the first long-distance transmission of high-voltage three-phase power was demonstrated at the International Exposition in Frankfurt, Germany. As a sequel of the SG evolution, power system dynamics have been traditionally classified in different phenomena, namely, rotor angle, frequency and voltage stability. Each phenomenon has been understood by power engineers under the scope of the SG dynamics. Rotor angle stability, as the name suggests, relates to the rotor dynamics and the ability to remain in synchronism after a system disturbance. The SG parameters such as synchronous, transient and subtransient reactances, as well as the rotor inertia and the subtransient time constants, among others, play an important role in the understanding of this phenomenon. Frequency stability relates to frequency dynamics and the ability to maintain steady values following a severe disturbance that results in a significant imbalance between generation and load. Such frequency dynamics are strongly linked to the SGs rotational speed. Similarly, SG parameters such as the rotor inertia and the dedicated controllers such as speed governors, play a fundamental role in the mathematical models that explain the physical phenomenon. Voltage stability relates to the evolution of system voltages after a disturbance. The ability to maintain steady values is highly linked to the SGs voltage control capability and the effects of dedicated controllers such as Automatic Voltage Regulators (AVRs) and OverExcitation Limiters (OELs). This comprehension of the system dynamics, the required controllers for enhancing system stability and the necessary models for an accurate representation of each phenomenon, are the result of decades of development and operation of power systems dominated by synchronous machines.
This paradigm has been rapidly changing since the early 2000s. The introduction of Inverter-Based Generators (IBGs) such as wind and photovoltaic generators as one of the major players in the energy production sector has been the leading factor. Compared to SGs with more than a century of collected experiences, the study of the impact that IBGs have on power system dynamics is in a relatively early stage. In fact, firstly in April 2020, the traditional classification of power system stability has been redefined by the IEEE Power System Dynamic Performance Committee (PSDP). The new definitions and characterization accounts for the impact that power electronic interfaced technologies have on power system dynamics. There is a lot to learn, but one thing is clear: the technological differences between SGs and IBGs are significant. IBGs behave utterly different in each and every of the power system stability issues listed above. The reasons are manifold. The lack of considerable inertia, the reduced short circuit power and the fact that IBGs are not naturally synchronized to the system are only a few examples. Such differences come along with numerous issues that negatively affect the power system dynamic performance. An article published in the “IEEE power & energy magazine", states that: unlike synchronous machines that act as a source of system strength, grid-following inverter-based power sources do not contribute to system strength but, rather, have the overall effect of reducing it". The sentence has a bitter taste of truth supported by studies and some operational experiences. However, every new technology has obstacles to overcome and this does not diminish the true potential of the technology. The key lies in identifying the potential weaknesses and work on them until they become strengths. This fact has encouraged researchers to find technical solutions that not only avoid undesired issues due to the connection of IBGs, but also contribute to the overall system strength and enhance its dynamic performance. This constitutes the fundamental problem that motivates this work as a humble contribution to one of the many areas concerning power system dynamics with high shares of IBGs: long-term voltage stability.