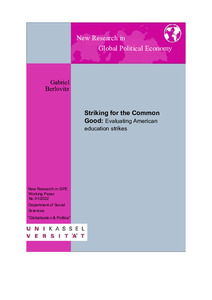 The re-emergence of massive strikes in the public education sector, predominantly in the more conservative, union-weak American South, has brought seismic change to the industry and its workers. Solving the puzzle as to why these strikes were so successful against massive obstacles could beget better methods for organizing strikes in a period when neo-liberal reforms threaten public services around the world. Furthermore, an understanding of why these strikes were successful can contribute to the contemporary discourse on the role of unions and different strategies in strikes. To explore this topic, this paper uses labor theory on communal involvement, power resources of unions, and organizing tactics, to guide analysis. This paper uses a regression analysis to evaluate the relationship between key strike statistics and the wage outcomes of the strike as a measure of strike success. To bring in relevant context and analyze broader theories, interviews are conducted with participants of key strikes. This paper finds that the participation percentage of the workforce, the power of the union involved, the duration, and the student-to-striker ratio have a strong relationship with the strike-wage outcome. Of these variables, the power of the union involved has the only negative relationship with the strike-wage outcome. Furthermore, the relationship between significant variables and the strategy employed in preparation for and during the strike, shows evidence of a relationship between alliances with the community and a strong strike-wage outcome. These findings have implications for theories of the power resources approach of unions and a host of theories related to strike costs and gains. I conclude that further research and data collection should be conducted to expand the explanatory value, applicability and quality of these regression results.