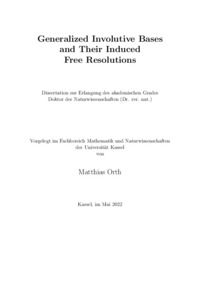 In this thesis, we generalize several types of involutive and marked bases for ideals in quotient rings of commutative polynomial rings. We apply these new types of bases to the analysis of infinite free resolutions and of Hilbert schemes defined over certain types of quotient rings. We are mostly concerned with Pommaret and Janet bases; the marked bases we consider are marked over monomial submodules that are quasi-stable, i.e., that possess finite Pommaret bases.

Involutive bases of the types we consider induce free resolutions of the ideals they generate and hence they yield estimates for homological invariants of these ideals, for example, for their Betti numbers. In the special case of monomial Pommaret bases, one even obtains an explicit formula for the differential of the resolution. However, the induced resolution is not necessarily minimal, because already the involutive bases themselves are in general not minimal generating systems. Moreover, the application of involutive and marked bases was up to now confined to ideals in ordinary polynomial rings.

The third part of contributions treats the application of these new types of bases to the computation and analysis of their induced infinite free resolutions. For the important special case of Clements-Lindström rings, we obtain closed formulas for the Betti numbers of the resolution. We identify several classes of quasi-stable monomial ideals in these quotient rings for which the induced resolution is minimal. Thus, we generalize several well-known resolution constructions, e.g. for stable and for square-free Borel ideals. We obtain explicit formulas for the differential which apply to some classes of quasi-stable ideals and their Pommaret-like bases.