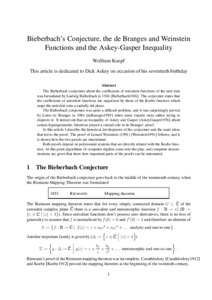 The Bieberbach conjecture about the coefficients of univalent functions of the unit disk was formulated by Ludwig Bieberbach in 1916 [Bieberbach1916]. The conjecture states that the coefficients of univalent functions are majorized by those of the Koebe function which maps the unit disk onto a radially slit plane. The Bieberbach conjecture was quite a difficult problem, and it was surprisingly proved by Louis de Branges in 1984 [deBranges1985] when some experts were rather trying to disprove it. It turned out that an inequality of Askey and Gasper [AskeyGasper1976] about certain hypergeometric functions played a crucial role in de Branges' proof. In this article I describe the historical development of the conjecture and the main ideas that led to the proof. The proof of Lenard Weinstein (1991) [Weinstein1991] follows, and it is shown how the two proofs are interrelated. Both proofs depend on polynomial systems that are directly related with the Koebe function. At this point algorithms of computer algebra come into the play, and computer demonstrations are given that show how important parts of the proofs can be automated.