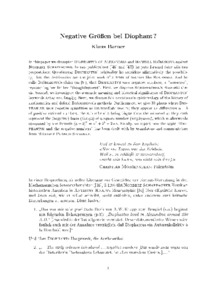 In this paper we champion Diophantus of Alexandria and Isabella Basmakova against Norbert Schappacher. In two publications ([46] and [47]) he puts forward inter alia two propositions: Questioning Diophantus' originality he considers affirmatively the possibility, that the Arithmetica are the joint work of a team of authors like Bourbaki. And he calls Basmakova's claim (in [5]), that Diophantus uses negative numbers, a "nonsense", reproaching her for her "thoughtlessness". First, we disprove Schappacher's Bourbaki thesis. Second, we investigate the semantic meaning and historical significance of Diophantus' keywords leipsis and mparxis. Next, we discuss Schappacher's epistemology of the history of mathematics and defend Basmakova's methods. Furthermore, we give 33 places where Diophantus uses negative quantities as intermediate results; they appear as differences a - b of positive rational numbers, the subtrahend b being bigger than the minuend a; they each represent the (negative) basis (pleyra) of a square number (tetragonos), which is afterwards computed by the formula (a - b)^2 = a^2 + b^2 - 2ab. Finally, we report how the topic "Diophantus and the negative numbers" has been dealt with by translators and commentators from Maximus Planudes onwards.