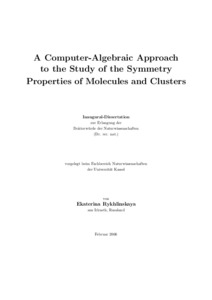 This thesis work is dedicated to use the computer-algebraic approach for dealing
with the group symmetries and studying the symmetry properties of molecules and clusters.
The Maple package Bethe, created to extract and manipulate the
group-theoretical data and to simplify some of the symmetry applications,
is introduced. First of all the advantages of using Bethe
to generate the group theoretical data are demonstrated. In the current version,
the data of 72 frequently applied point groups can be used, together with the data
for all of the corresponding double groups. The emphasize of this work is placed
to the applications of this package in physics of molecules and clusters.
Apart from the analysis of the spectral activity of molecules with point-group symmetry,
it is demonstrated how Bethe can be used to understand the field splitting in
crystals or to construct the corresponding wave functions.
Several examples are worked out to display (some of) the present features
of the Bethe program. While we cannot show all the details explicitly, these
examples certainly demonstrate the great potential in applying computer algebraic
techniques to study the symmetry properties of molecules and clusters.

A special attention is placed in this thesis work on the flexibility of the
Bethe package, which makes it possible to implement another applications of symmetry.
This implementation is very reasonable, because some of the most complicated
steps of the possible future applications are already realized within the
Bethe. For instance, the vibrational coordinates in terms of the
internal displacement vectors for the Wilson's method and the
same coordinates in terms of cartesian displacement vectors as well as the
Clebsch-Gordan coefficients for the Jahn-Teller problem are
generated in the present version of the program. For the Jahn-Teller problem, moreover,
use of the computer-algebraic tool
seems to be even inevitable, because this problem demands an analytical access
to the adiabatic potential and, therefore, can not be realized by the numerical algorithm.

However, the ability of the Bethe package is not exhausted by applications, mentioned in this thesis work.
There are various directions in which the Bethe program could be developed in the future. Apart from
(i) studying of the magnetic properties of materials and (ii) optical transitions,
interest can be pointed out for (iii) the vibronic spectroscopy,
and many others.
Implementation of these applications into the package can make Bethe a much more powerful tool.