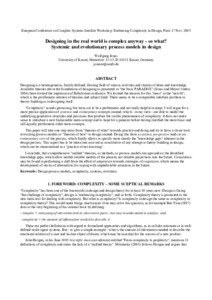 Designing in the real world is complex anyway - so what?

Designing is a heterogeneous, fuzzily defined, floating field of various activities and chunks of ideas and knowledge. Available theories about the foundations of designing as presented in "the basic PARADOX" (Jonas and Meyer-Veden 2004) have evoked the impression of Babylonian confusion. We located the reasons for this "mess" in the "non-fit", which is the problematic relation of theories and subject field. There seems to be a comparable interface problem in theory-building as in designing itself. "Complexity" sounds promising, but turns out to be a problematic and not really helpful concept. I will argue for a more precise application of systemic and evolutionary concepts instead, which - in my view - are able to model the underlying generative structures and processes that produce the visible phenomenon of complexity. It does not make sense to introduce a new fashionable meta-concept and to hope for a panacea before having clarified the more basic and still equally problematic older meta-concepts. This paper will take one step away from "theories of what" towards practice and doing and try to have a closer look at existing process models or "theories of how" to design instead. Doing this from a systemic perspective leads to an evolutionary view of the process, which finally allows to specify more clearly the "knowledge gaps" inherent in the design process. This aspect has to be taken into account as constitutive of any attempt at theory-building in design, which can be characterized as a "practice of not-knowing". I conclude, that comprehensive "unified" theories, or methods, or process models run aground on the identified knowledge gaps, which allow neither reliable models of the present, nor reliable projections into the future. Consolation may be found in performing a shift from the effort of adaptation towards strategies of exaptation, which means the development of stocks of alternatives for coping with unpredictable situations in the future.