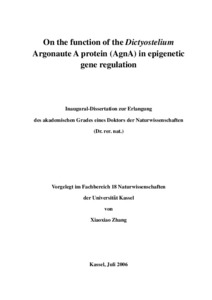 With molecular biology methods and bioinformatics, the Argonaute proteins in Dictyostelium discoideum were characterized, and the function of the AgnA protein in RNAi and DNA methylation was investigated, as well as cellular features. Also interaction partners of the PAZ-Piwi domain of AgnA (PAZ-PiwiAgnA) were discovered. The Dictyostelium genome encodes five Argonaute proteins, termed AgnA/B/C/D/E. The expression level of Argonaute proteins was AgnB/D/E > AgnA > AgnC. All these proteins contain the characteristic conserved of PAZ and Piwi domains. Fluorescence microscopy revealed that the overexpressed C-terminal GFP-fusion of PAZ-PiwiAgnA (PPWa-GFP) localized to the cytoplasm. Overexpression of PPWa-GFP leaded to an increased gene silencing efficiency mediated by RNAi but not by antisense RNA. This indicated that PAZ-PiwiAgnA is involved in the RNAi pathway, but not in the antisense pathway. An analysis of protein-protein interactions by a yeast-two-hybrid screen on a cDNA library from vegetatively grown Dictyostelium revealed that several proteins, such as EF2, EF1-I, IfdA, SahA, SamS, RANBP1, UAE1, CapA, and GpdA could interact with PAZ-PiwiAgnA. There was no interaction between PAZ-PiwiAgnA and HP1, HelF and DnmA detected by direct yeast-two-hybrid analysis. The fluorescence microscopy images showed that the overexpressed GFP-SahA or IfdA fusion proteins localized to both cytoplasm and nuclei, while the overexpressed GFP-SamS localized to the cytoplasm. The expression of SamS in AgnA knock down mutants was strongly down regulated on cDNA and mRNA level in, while the expression of SahA was only slightly down regulated. AgnA knock down mutants displayed defects in growth and phagocytosis, which suggested that AgnA affects also cell biological features. The inhibition of DNA methylation on DIRS-1 and Skipper retroelements, as well as the endogenous mvpB and telA gene, observed for the same strains, revealed that AgnA is involved in the DNA methylation pathway. Northern blot analysis showed that Skipper and DIRS-1 were rarely expressed in Ax2, but the expression of Skipper was upregulated in AgnA knock down mutants, while the expression of DIRS-1 was not changed. A knock out of the agnA gene failed even though the homologous recombination of the disruption construct occurred at the correct site, which indicated that there was a duplication of the agnA gene in the genome. The same phenomenon was also observed in ifdA knock out experiments.