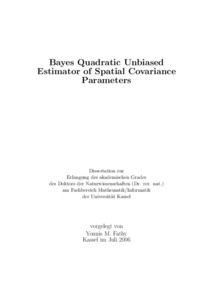 This work presents Bayes invariant quadratic unbiased estimator, for short BAIQUE. Bayesian approach is used here to estimate the covariance functions of the regionalized
variables which appear in the spatial covariance structure in mixed linear model. Firstly a brief review of spatial process, variance covariance components structure and Bayesian inference is given, since this project deals with these concepts. Then the linear equations model corresponding to BAIQUE in the general case is formulated. That Bayes estimator of variance components with too many unknown parameters is complicated to be solved analytically. Hence, in order to facilitate the handling with this system, BAIQUE of spatial covariance model with two parameters is considered.
Bayesian estimation arises as a solution of a linear equations system which requires
the linearity of the covariance functions in the parameters. Here the availability of prior information on the parameters is assumed. This information includes apriori distribution functions which enable to find the first and the second moments matrix. The Bayesian estimation suggested here depends only on the second moment of the prior distribution. The estimation appears as a quadratic form y'Ay , where y is the vector of filtered data observations. This quadratic estimator is used to estimate the linear function of unknown variance components. The matrix A of BAIQUE plays an important role. If such a symmetrical matrix exists, then Bayes risk becomes minimal and the unbiasedness conditions are fulfilled. Therefore, the symmetry of this matrix is elaborated in this work. Through dealing with the infinite series of matrices, a representation of the matrix A is obtained
which shows the symmetry of A. In this context, the largest singular value of the decomposed matrix of the infinite series is considered to deal with the convergence condition and also it is connected with Gerschgorin Discs and Poincare theorem.
Then the BAIQUE model for some experimental designs is computed and compared.
The comparison deals with different aspects, such as the influence of the position of the
design points in a fixed interval. The designs that are considered are those with their points distributed in the interval [0, 1]. These experimental structures are compared with respect to the Bayes risk and norms of the matrices corresponding to distances, covariance structures and matrices which have to satisfy the convergence condition. Also different types of the regression functions and distance measurements are handled. The influence of
scaling on the design points is studied, moreover, the influence of the covariance structure on the best design is investigated and different covariance structures are considered. Finally, BAIQUE is applied for real data. The corresponding outcomes are compared with the results of other methods for the same data. Thereby, the special BAIQUE, which estimates the general variance of the data, achieves a very close result to the classical empirical variance.