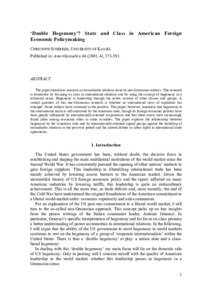 The paper introduces research on transatlantic relations done by neo-Gramscian authors. This research is distinctive by focusing on class in international relations and by using the concept of hegemony in a relational sense. Hegemony is leadership through the active consent of other classes and groups. A central question of this neo-Gramscian research is whether an international class of capitalists has emerged. Some authors have answered in the positive. This paper, however, maintains that hegemony in the international realm is still exercised by the American state, though its foreign economic policies have been greatly influenced by internationally-oriented corporations and that these actors have increasingly found allies among economic elites in other countries. The paper explores the relationship between hegemony by the American state and by internationally-oriented capital groups against the backdrop of transatlantic relations in the post-war period and the currrent debate on labor rights in international trade agreements.