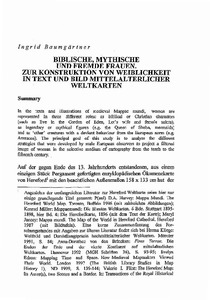 In the texts and illustrations of medieval Mappae mundi, women are represented in three different roles: as biblical or Christian characters (such as Eve in the Garden of Eden, Lot's wife and female saints), as legendary or mythical figures (e.g. the Queen of Sheba, mermaids) and as 'other' creatures with a deviant behaviour from the European norm (e.g. Amazons). The principal goal of this study is to analyse the different strategies that were developed by male European observers to project a filtered image of woman in the selective medium of cartography from the tenth to the fifteenth century.