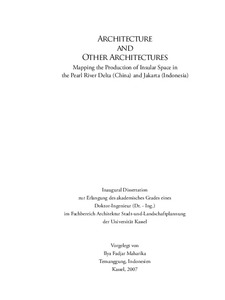 Architecture and other Architectures: Mapping the Production of Insular Space in the Pearl River Delta (China) and Jakarta (Indonesia)

Globalization is widely regarded as the rise of the borderless world. However in practice, true globalization points rather to a “spatial logic” by which globalization is manifested locally in the shape of insular space. Globalization in this sense is not merely about the creation of physical fragmentation of space but also the creation of social disintegration. This study tries to proof that global processes also create various forms of insular space leading also to specific social implications.
In order to examine the problem this study looks at two cases: China’s Pearl River Delta (PRD) and Jakarta in Indonesia.
The PRD case reveals three forms of insular space namely the modular, concealed and the hierarchical. The modular points to the form of enclosed factories where workers are vulnerable for human-right violations due to the absent of public control. The concealed refers to the production of insular space by subtle discrimination against certain social groups in urban space. And the hierarchical points to a production of insular space that is formed by an imbalanced population flow. The Jakarta case attempts to show more types of insularity in relation to the complexity of a mega-city which is shaped by a culture of exclusion. Those are dormant and hollow insularity. The dormant refers to the genesis of insular– radical – community from a culture of resistance. The last type, the hollow, points to the process of making a “pseudo community” where sense of community is not really developed as well as weak social relationship with its surrounding.
Although global process creates various expressions of territorial insularization, however, this study finds that the “line of flight” is always present, where the border of insularity is crossed. The PRD’s produces vernacular modernization done by peasants which is less likely to be controlled by the politics of insularization. In Jakarta, the culture of insularization causes urban informalities that have no space, neither spatially nor socially; hence their state of ephemerality continues as a tactic of place-making. This study argues that these crossings possess the potential for reconciling venue to defuse the power of insularity.

The study is partially sponsored by the DAAD (Deutscher Akademischer Austauschdienst)