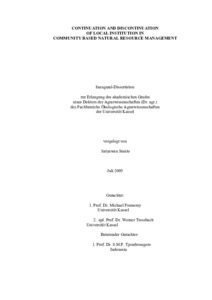 Currently the push toward frontier areas, which until twenty years ago were still largely untouched by commercial agriculture, is taking place on a massive scale. This push is being driven not the least by global economic developments, such as the price increase of agriculture commodities like coffee and cocoa. In most cases the indigenous communities become trapped between the state monopoly in natural resource management and the competition for resources by external actors. In this processes the indigenous communities start to lose their access to resources. Another victim in this process is the environment where the natural resources are imbedded. International and national organizations working to conserve environment have became conscious of the important role that indigenous people could fulfill as partners in this endeavour. This partnership in struggle has produced a new discourse on the relationship between indigenous people and their environment. As a further consequence, programs were set up to develop what became known as Community Based Natural Resource Management (CBNRM) with its numerous variations. Based on a case study in a village on the eastern border of the Lore Lindu National Park in Central Sulawesi, this study questioned the basic assumption behind the concept of Community Based Natural Resource Management (CBNRM). Namely the assumption that communities living at the margin of forest are socially and culturally homogenous, still more or less egalitarian, and basically living in harmony with their natural environment. This study was inspired by the persistent critique – although still a minority – on the basic assumption the CBNRM from academicians and practitioners working through the Entitlement perspective. Another inspiration was the mounting critique toward the participatory approach. In its effort the study explore further the usefulness of certain approaches. One of the approach much relied on in this study was the local history of the community studied, through exerting oral and local written documents on local history, legends and local stories. These sources proofed quite capable in bringing the local history into the light. Another was the actor oriented approach, which later came to be supported by the concept of Social Pool Resources. The latter concept proofed to be useful as analytical instrument to integrate social institutions and the common pool resources, as a field of action for the different actors as human agencies.