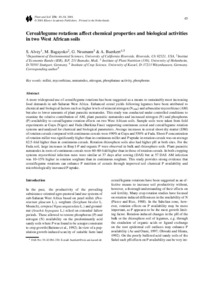 A more widespread use of cereal/legume rotations has been suggested as a means to sustainably meet increasing food demands in sub-Saharan West Africa. Enhanced cereal yields following legumes have been attributed to chemical and biological factors such as higher levels of mineral nitrogen (Nmin) and arbuscular mycorrhizae (AM) but also to lower amounts of plant parasitic nematodes. This study was conducted under controlled conditions to
examine the relative contribution of AM, plant parasitic nematodes and increased nitrogen (N) and phosphorus (P) availability to cereal/legume rotation effects on two West African soils. Sample soils were taken from field experiments at Gaya (Niger) and Fada (Burkina Faso) supporting continuous cereal and cereal/legume rotation
systems and analysed for chemical and biological parameters. Average increases in cereal shoot dry matter (DM) of rotation cereals compared with continuous cereals were 490% at Gaya and 550% at Fada. Shoot P concentration of rotation millet was significantly higher than in continuous millet and P uptake in rotation cereals was on average
62.5-fold higher than in continuous cereals. Rotation rhizosphere soils also had higher pH at both sites. For the Fada soil, large increases in Bray1-P and organic P were observed in bulk and rhizosphere soils. Plant parasitic nematodes in roots of continuous cereals were 60–80-fold higher than in those of rotation cereals. In both cropping systems mycorrhizal infection rates were similar at 37 days after sowing (DAS) but at 57 DAS AM infection was 10–15% higher in rotation sorghum than in continuous sorghum. This study provides strong evidence that cereal/legume rotations can enhance P nutrition of cereals through improved soil chemical P availability and microbiologically increased P uptake.