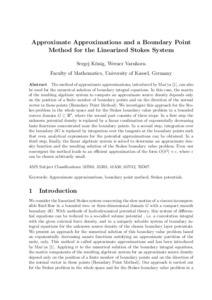 The method of approximate approximations, introduced by Maz'ya [1], can also be used for the numerical solution of boundary integral equations. In this case, the matrix
of the resulting algebraic system to compute an approximate source density depends only on the position of a finite number of boundary points and on the direction of the normal vector in these points (Boundary Point Method). We investigate this approach for the Stokes problem in the whole space and for the Stokes boundary value problem in a bounded convex domain G subset R^2, where the second part consists of three steps: In a first step the unknown potential density is replaced by a linear combination of exponentially decreasing basis functions concentrated near the boundary points. In a second step, integration over the boundary partial G is replaced by integration over the tangents at the boundary points such that even analytical expressions for the potential approximations can be obtained. In a third step, finally, the linear algebraic system is solved to determine an approximate density function and the resulting solution of the Stokes boundary value problem. Even not convergent the method leads to an efficient approximation of the form O(h^2) + epsilon, where epsilon can be chosen arbitrarily small.