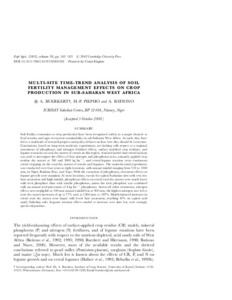 Soil fertility constraints to crop production have been recognized widely as a major obstacle to food security and agro-ecosystem sustainability in sub-Saharan West Africa. As such, they have led to a multitude of research projects and policy debates on how best they should be overcome. Conclusions, based on long-term multi-site experiments, are lacking with respect to a regional
assessment of phosphorus and nitrogen fertilizer effects, surface mulched crop residues, and legume rotations on total dry matter of cereals in this region. A mixed model time-trend analysis was used to investigate the effects of four nitrogen and phosphorus rates, annually applied crop
residue dry matter at 500 and 2000 kg ha^-1, and cereal-legume rotation versus continuous
cereal cropping on the total dry matter of cereals and legumes. The multi-factorial experiment was conducted over four years at eight locations, with annual rainfall ranging from 510 to 1300 mm, in Niger, Burkina Faso, and Togo. With the exception of phosphorus, treatment effects on legume growth were marginal. At most locations, except for typical Sudanian sites with very low base saturation and high rainfall, phosphorus effects on cereal total dry matter were much lower with rock phosphate than with soluble phosphorus, unless the rock phosphate was combined with an annual seed-placement of 4 kg ha^-1 phosphorus. Across all other treatments, nitrogen effects were negligible at 500 mm annual rainfall but at 900 mm, the highest nitrogen rate led to total dry matter increases of up to 77% and, at 1300 mm, to 183%. Mulch-induced increases in cereal total dry matter were larger with lower base saturation, reaching 45% on typical acid
sandy Sahelian soils. Legume rotation effects tended to increase over time but were strongly species-dependent.