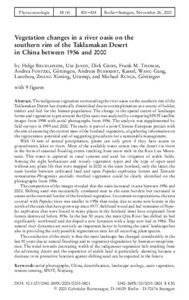 The indigenous vegetation surrounding the river oases on the southern rim of the
Taklamakan Desert has drastically diminished due to overexploitation as a source of fodder, timber and fuel for the human population. The change in the spatial extent of landscape forms and vegetation types around the Qira oasis was analyzed by comparing SPOT satellite images from 1998 with aerial photographs from 1956. The analysis was supplemented by field surveys in 1999 and 2000. The study is part of a joint Chinese-European project with the aim of assessing the current state of the foreland vegetation, of gathering information on
the regeneration potential and of suggesting procedures for a sustainable management.
With 33 mm of annual precipitation, plants can only grow if they have access to
groundwater, lakes or rivers. Most of the available water comes into the desert via rivers in the form of seasonal flooding events resulting from snow melt in the Kun Lun Mountains. This water is captured in canal systems and used for irrigation of arable fields. Among the eight herbaceous and woody vegetation types and the type of open sand without any plant life that were mapped in 2000 in the oasis foreland, only the latter, the oasis border between cultivated land and open Populus euphratica forests and Tamarix ramosissima-Phragmites australis riverbed vegetation could be clearly identified on the photographs from 1956. The comparison of the images revealed that the oasis increased in area between 1956 and
2000. Shifting sand was successfully combated near to the oasis borders but increased in
extent at the outward border of the foreland vegetation. In contrast to expectations, the area covered with Populus trees was smaller in 1956 than today due to some new forests in the north of the oasis that have grown up since 1977. Subfossil wood and leaf remnants of Populus euphratica that were found in many places in the foreland must have originated from forests destroyed before 1956. In the last 50 years, the main Qira River has shifted its bed significantly northward and developed a new furcation with a large new bed in 1986. The natural river dynamics are not only an important factor in forming the oasis’ landscape but also in providing the only possible regeneration sites for all occurring plant species. The conclusion of the study is that the oasis landscape has changed considerably in the last 50 years due to natural floodings and to vegetation degradation by human overexploitation. The trend towards decreasing width of the indigenous vegetation belt resulting from
the advancing desert and the expansion of arable land is particularly alarming because a decrease in its protective function against shifting sand can be expected in the future.