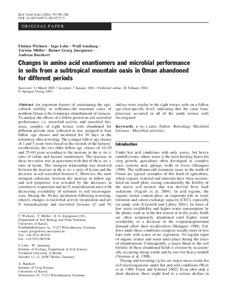 An important feature of maintaining the agricultural stability in millennia-old mountain oases of northern Oman is the temporary abandonment of terraces. To analyse the effects of a fallow period on soil microbial performance, i.e. microbial activity and microbial biomass, samples of eight terrace soils abandoned for different periods were collected in situ, assigned to four fallow age classes and incubated for 30 days in the laboratory after rewetting. The younger fallow age classes of 1 and 5 years were based on the records of the farmers’
recollections, the two older fallow age classes of 10–20 and 25–60 years according to the increase in the D -to- L ratio of valine and leucine enantiomers. The increase in
these two ratios was in agreement with that of the D -to- L ratio of lysine. The strongest relationship was observed
between the increase in the D -to- L ratio of lysine and the decrease in soil microbial biomass C. However, the most stringent coherence between the increase in fallow age
and soil properties was revealed by the decreases in cumulative respiration and net N mineralisation rates with decreasing availability of substrate to soil microorganisms. During the 30-day incubation following rewetting, relative changes in microbial activity (respiration and net
N mineralisation) and microbial biomass (C and N)indices were similar in the eight terrace soils on a fallow age-class-specific level, indicating that the same basic
processes occurred in all of the sandy terrace soils investigated.