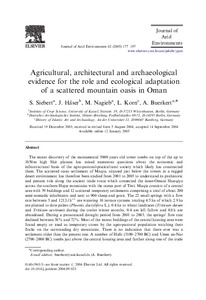 Agricultural, architectural and archaeological evidence for the role and ecological adaptation of a scattered mountain oasis in Oman

The recent discovery of the monumental 5000 years old tower tombs on top of the up to 1850 m high Shir plateau has raised numerous questions about the economic and infrastructural basis of the agro-pastoral-piscicultural society which likely has constructed them. The scattered oasis settlement of Maqta, situated just below the towers in a rugged desert environment has therefore been studied from 2001 to 2003 to understand its prehistoric
and present role along the ancient trade route which connected the inner-Omani Sharqiya across the southern Hajar mountains with the ocean port of Tiwi. Maqta consists of a central area with 59 buildings and 12 scattered temporary settlements comprising a total of about 200 semi-nomadic inhabitants and next to 900 sheep and goats. The 22 small springs with a flow rate between 5 and 1212-l h^-1 are watering 16 terrace systems totaling 4.5 ha of which 2.9 ha are planted to date palms (Phoenix dactylifera L.), 0.4 ha to wheat landraces (Triticum durum and Triticum aestivum) during the cooler winter months, 0.4 are left fallow and 0.8 h are abandoned. During a pronounced drought period from 2001 to 2003, the springs’ flow rate declined between 38% and 72%. Most of the recent buildings of the central housing area were
found empty or used as temporary stores by the agro-pastoral population watching their
flocks on the surrounding dry mountains. There is no indication that there ever was a
settlement older than the present one. A number of Hafit (3100–2700 BC) and Umm an-Nar
(2700–2000 BC) tombs just above the central housing area and further along one of the trade routes to the coast are the only indication of an old pastoral landuse in Maqta territory where oasis agriculture may have entered only well after 1000 AD. With this little evidence of existence during the 3rd millennium BC, Maqta is unlikely to have played any major role favouring the construction of the nearby monumental Shir tower tombs other than providing water for herders and their flocks, early migrant traders or tower tomb constructors.