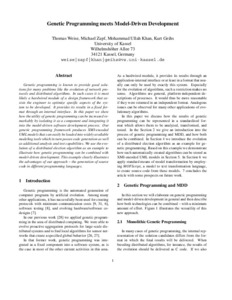 Genetic programming is known to provide good solutions for many problems like the evolution of network protocols and distributed algorithms. In such cases it is most likely a hardwired module of a design framework that assists the engineer to optimize specific aspects of the system
to be developed. It provides its results in a fixed format through an internal interface. In this paper we show how the utility of genetic programming can be increased remarkably by isolating it as a component and integrating it into the model-driven software development process. Our genetic programming framework produces XMI-encoded UML models that can easily be loaded into widely available modeling tools which in turn posses code generation as well as additional analysis and test capabilities. We use the evolution
of a distributed election algorithm as an example to illustrate how genetic programming can be combined with
model-driven development. This example clearly illustrates the advantages of our approach – the generation of source
code in different programming languages.