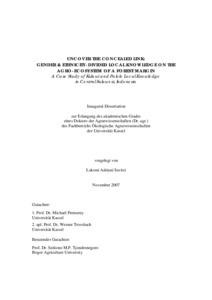 Uncover the Concealed Link: Gender & Ethnicity-Divided Local Knowledge on the Agro-Ecosystem of a Forest Margin

(A Case Study of Kulawi and Palolo Local Knowledge in Central Sulawesi, Indonesia)

This research is a study about knowledge interface that aims to analyse
knowledge discontinuities, the dynamic and emergent characters of struggles
and interactions within gender system and ethnicity differences. The cacao
boom phenomenon in Central Sulawesi is the main context for a changing of
social relations of production, especially when the mode of production has
shifted or is still underway from subsistence to petty commodity production. This
agrarian change is not only about a change of relationship and practice, but, as
my previous research has shown, also about the shift of knowledge domination,
because knowledge construes social practice in a dialectical process. Agroecological
knowledge is accumulated through interaction, practice and
experience. At the same time the knowledge gained from new practices and
experiences changes mode of interaction, so such processes provide the arena
where an interface of knowledge is manifested.
In the process of agro-ecological knowledge interface, gender and
ethnic group interactions materialise in the decision-making of production and
resource allocation at the household and community level. At this point,
power/knowledge is interplayed to gain authority in decision-making. When
authority dominates, power encounters resistance, whereas the dominant power
and its resistance are aimed to ensure socio-economic security. Eventually, the
process of struggle can be identified through the pattern of resource utilisation as
a realisation of production decision-making. Such processes are varied from one
community to another, and therefore, it shows uniqueness and commonalities,
especially when it is placed in a context of shifting mode of production. The focus
is placed on actors: men and women in their institutional and cultural setting,
including the role of development agents.
The inquiry is informed by 4 major questions: 1) How do women and men
acquire, disseminate, and utilise their agro ecological knowledge, specifically in
rice farming as a subsistence commodity, as well as in cacao farming as a petty
commodity? How and why do such mechanisms construct different knowledge
domains between two genders? How does the knowledge mechanism apply in
different ethnics? What are the implications for gender and ethnicity based
relation of production? ; 2) Using the concept of valued knowledge in a shifting
mode of production context: is there any knowledge that dominates others?
How does the process of domination occur and why? Is there any form of
struggle, strategies, negotiation, and compromise over this domination? How do
these processes take place at a household as well as community level? How does
it relate to production decision-making? ; 3) Putting the previous questions in two
communities with a different point of arrival on a path of agricultural
commercialisation, how do the processes of struggle vary? What are the bases of
the commonalities and peculiarities in both communities?; 4) How the decisions
of production affect rice field - cacao plantation - forest utilisation in the two
villages? How does that triangle of resource use reflect the constellation of local
knowledge in those two communities? What is the implication of this knowledge
constellation for the cacao-rice-forest agroecosystem in the forest margin area?
Employing a qualitative approach as the main method of inquiry, indepth
and dialogic interviews, participant observer role, and document review
are used to gather information. A small survey and children’s writing competition
are supplementary to this data collection method. The later two methods are
aimed to give wider information on household decision making and perception
toward the forest.
It was found that local knowledge, particularly knowledge pertaining to
rice-forest-cacao agroecology is divided according to gender and ethnicity. This
constellation places a process of decision-making as ‘the arena of interface’
between feminine and masculine knowledge, as well as between dominant and
less dominant ethnic groups. Transition from subsistence to a commercial mode of
production is a context that frames a process where knowledge about cacao
commodity is valued higher than rice. Market mechanism, as an external power,
defines valued knowledge. Valued knowledge defines the dominant knowledge
holder, and decision. Therefore, cacao cultivation becomes a dominant
practice. Its existence sacrifices the presence of rice field and the forest.
Knowledge about rice production and forest ecosystem exist, but is less valued.
So it is unable to challenge the domination of cacao.
Various forms of struggles - within gender an ethnicity context - to resist
cacao domination are an expression of unequal knowledge possession.
Knowledge inequality implies to unequal access to withdraw benefit from market
valued crop. When unequal knowledge fails to construct a negotiated field or
struggles fail to reveal ‘marginal’ decision, e.g. intensification instead of cacao
expansion to the forest, interface only produces divergence. Gender and
ethnicity divided knowledge is unabridged, since negotiation is unable to
produce new knowledge that accommodates both interests. Rice is loaded by
ecological interest to conserve the forest, while cacao is driven by economic
interest to increase welfare status.
The implication of this unmediated dominant knowledge of cacao
production is the construction of access; access to the forest, mainly to withdraw
its economic benefit by eliminating its ecological benefit. Then, access to cacao
as the social relationship of production to acquire cacao knowledge; lastly,
access to defend sustainable benefit from cacao by expansion. ‘Socio-economic
Security’ is defined by Access.
The convergence of rice and cacao knowledge, however, should be
made possible across gender and ethnicity, not only for the sake of forest
conservation as the insurance of ecological security, but also for community’s
socio-economic security. The convergence might be found in a range of
alternative ways to conduct cacao sustainable production, from agroforestry
system to intensification.