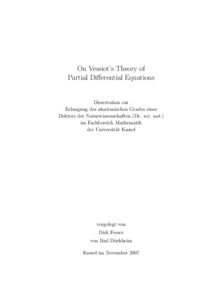 An arbitrary system may (locally) be represented in reduced Cartan
normal form. This leads to a natural description of its geometric
symbol. The Vessiot distribution now can be split into the direct sum
of the symbol and a horizontal complement (which is not unique). The
n-dimensional subdistributions which close under the Lie bracket
and are transversal to the base manifold are the sought tangential
approximations for the solutions of the differential equation. It is
now possible to show their existence by analyzing the structure
equations.

Vessiot's theory is now based on a rigorous foundation. Furthermore,
the relation between Vessiot's approach and the crucial notions of
the formal theory (like formal integrability and involutivity of
differential equations) is clarified. The possible obstructions to
involution of a differential equation are deduced explicitly.

In the second part of the thesis it is shown that Vessiot's approach
for the construction of the wanted distributions step by step
succeeds if, and only if, the given system is involutive. Firstly,
an existence theorem for integral distributions is proven. Then an
existence theorem for flat Vessiot connections is shown. The
differential-geometric structure of the basic systems is analyzed and
simplified, as compared to those of other approaches, in particular
the structure equations which are considered for the proofs of the
existence theorems: here, they are a set of linear equations and an
involutive system of differential equations. The definition of
integral elements given here links Vessiot theory and the dual
Cartan-Kähler theory of exterior systems.

The analysis of the structure equations not only yields theoretical
insight but also produces an algorithm which can be used to derive
the coefficients of the vector fields, which span the integral
distributions, explicitly. Therefore implementing the algorithm in
the computer algebra system MuPAD now is possible.