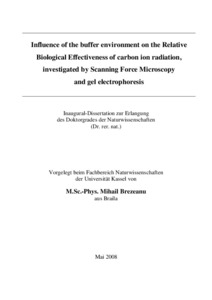 Influence of the buffer environment on the Relative Biological Effectiveness of carbon ion radiation, investigated by Scanning Force Microscopy and gel electrophoresis

This work focuses on the analysis of the influence of environment on the relative biological effectiveness (RBE) of carbon ions on molecular level. Due to the high relevance of RBE for medical applications, such as tumor therapy, and radiation protection in space, DNA damages have been investigated in order to understand the biological efficiency of heavy ion radiation. The contribution of this study to the radiobiology research consists in the analysis of plasmid DNA damages induced by carbon ion radiation in biochemical buffer environments, as well as in the calculation of the RBE of carbon ions on DNA level by mean of scanning force microscopy (SFM). In order to study the DNA damages, besides the common electrophoresis method, a new approach has been developed by using SFM. The latter method allows direct visualisation and measurement of individual DNA fragments with an accuracy of several nanometres. In addition, comparison of the results obtained by SFM and agarose gel electrophoresis methods has been performed in the present study.
Sparsely ionising radiation, such as X-rays, and densely ionising radiation, such as carbon ions, have been used to irradiate plasmid DNA in trishydroxymethylaminomethane (Tris buffer) and 4-(2-hydroxyethyl)-1-piperazineethanesulfonic acid (HEPES buffer) environments. These buffer environments exhibit different scavenging capacities for hydroxyl radical (HO0), which is produced by ionisation of water and plays the major role in the indirect DNA damage processes. Fragment distributions have been measured by SFM over a large length range, and as expected, a significantly higher degree of DNA damages was observed for increasing dose. Also a higher amount of double-strand breaks (DSBs) was observed after irradiation with carbon ions compared to X-ray irradiation. The results obtained from SFM measurements show that both types of radiation induce multiple fragmentation of the plasmid DNA in the dose range from D = 250 Gy to D = 1500 Gy.
Using Tris environments at two different concentrations, a decrease of the relative biological effectiveness with the rise of Tris concentration was observed. This demonstrates the radioprotective behavior of the Tris buffer solution.
In contrast, a lower scavenging capacity for all other free radicals and ions, produced by the ionisation of water, was registered in the case of HEPES buffer compared to Tris solution. This is reflected in the higher RBE values deduced from SFM and gel electrophoresis measurements after irradiation of the plasmid DNA in 20 mM HEPES environment compared to 92 mM Tris solution.
These results show that HEPES and Tris environments play a major role on preventing the indirect DNA damages induced by ionising radiation and on the relative biological effectiveness of heavy ion radiation.
In general, the RBE calculated from the SFM measurements presents higher values compared to gel electrophoresis data, for plasmids irradiated in all environments. Using a large set of data, obtained from the SFM measurements, it was possible to calculate the survive rate over a larger range, from 88% to 98%, while for gel electrophoresis measurements the survive rates have been calculated only for values between 96% and 99%.
While the gel electrophoresis measurements provide information only about the percentage of plasmids DNA that suffered a single DSB, SFM can count the small plasmid fragments produced by multiple DSBs induced in a single plasmid. Consequently, SFM generates more detailed information regarding the amount of the induced DSBs compared to gel electrophoresis, and therefore, RBE can be calculated with more accuracy. Thus, SFM has been proven to be a more precise method to characterize on molecular level the DNA damage induced by ionizing radiations.