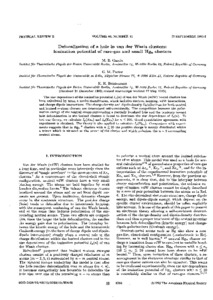 The size dependence of the ionization potential I_p(n) of van der Waals (vdW) bound clusters has been calculated by using a model Hamiltonian, which includes electron hopping, vdW interactions, and charge-dipole interactions. The charge-density and dipole-density distributions for both neutral and ionized n-atom clusters are determined self-consistently. The competition between the polarization energy of the neutral atoms surrounding a partially localized hole and the tendency toward hole delocalization in the ionized clusters is found to dominate the size dependence of I_p(n). To test our theory, we culculate I_p(Xe_n) and I_p(Kr_n) for n \le 300. Good quantitative agreement with experiment is obtained. The theory is also applied to calculate I_p(Hg_n). Comparison with experiments suggests that in Hg_n^+ clusters with n \le 20 the positive charge is mainly distributed within a trimer which is situated at the center of the cluster and which polarizes the n - 3 surrounding neutral atoms.