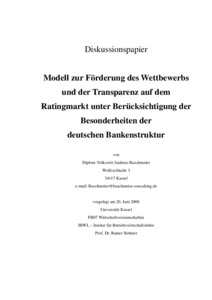 This paper provides a model for the international market of credit ratings in order to promote transparency of rating methodologies and combat the oligopolistic market
structure where Standard & Poor‘s, Moody‘s and Fitch Ratings collectively comprise approximately 85 percent of the market. For the German credit market this paper
strongly advises the establishment of at least three centralistic credit rating agencies
(CRAs), set up and run independently by the large bank institutions – „Großbanken“, „Sparkassen“ and „Genossenschaftsbanken“. By acting as CRAs, universal banks could not only decrease their costs but would also be able to increase competition and transparency.
These new credit rating agencies would be subject to the Basel II internal ratings-based (IRB) surveillance standards that go far beyond the Basel II standard approach
with its external ratings by the dominating three US-american CRAs. Due to the fact that the new Basle Accord has already been implemented in Europe, this model
could be applied all over Europe and possibly even worldwide, assuming the US were to adopt the new capital adequacy rules. This would lead to an increase in the number of CRAs and hence to more competition, as the barriers to entry in the rating industry would not apply to these new institutions because of their expertise in the credit market. The fact that the IRB-criteria already have to be disclosed by law would make the methodologies transparent and subject to approval by national regulators such as the „Bundesanstalt für Finanzdienstleistungsaufsicht“ (BaFin) in Germany. Hence the requirement to set up a new monitoring committee in Europe would become obsolete.