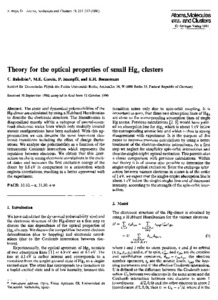 Theory for the optical properties of small Hg_n clusters

The static and dynamical polarizabilities of the Hg-dimer are calculated by using a Hubbard Hamiltonian to describe the electronic structure. The Hamiltonian is
diagonalized exactly within a subspace of second-quantized electronic states from which only multiply ionized atomic configurations have been excluded. With this approximation
we can describe the most important electronic
transitions including the effect of charge fluctuations. We analyze the polarizability as a function of the intraatomic Coulomb interaction which represents the repulsion between electrons. We obtain that this interaction results in strong electronic correlations in the excited states and increases the first excitation energy of the
dimer by 0.8 eV in comparison to a calculation which neglects correlations, resulting in a better agreement with
the experiment.