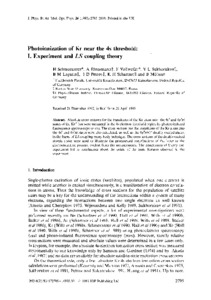 Photoionization of Kr near the 4s threshold: I. Experiment and LS coupling theory