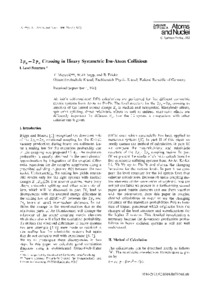 Ab initio self-consistent DFS calculations are performed for five different symmetric
atomic systems from Ar-Ar to Pb-Pb. The level structure for the {2p_\pi}-{2p_\sigma} crossing as function of the united atomic charge Z_u is studied and interpreted. Manybody effects, spin-orbit splitting, direct relativistic effects as well as indirect relativistic effects are differently important for different Z_u. For the I-I system a comparison with other calculations is given.