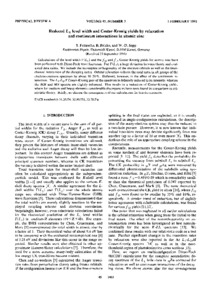 Calculations of the level width \gamma( L_1) and the f_12 and f_13 Coster-Kronig yields for atomic zinc have been performed with Dirac-Fock wave functions. For \gamma(L_1), a large deviation between theory and evaluated
data exists. We include the incomplete orthogonality of the electron orbitals as well as the interchannel interaction of the decaying states. Orbital relaxation reduces the total rates in all groups of the
electron-emission spectrum by about 10-20 %. Different, however, is the effect of the continuum interaction.
The L_1-L_23X Coster-Kronig part of the spectrum is definitely reduced in its intensity, whereas the MM and MN spectra are slightly enhanced. This results in a reduction of Coster-Kronig yields,
where for medium and heavy elements considerable discrepancies have been found in comparison to relativistic
theory. Briefly, we discuss the consequences of our calculations for heavier elements.