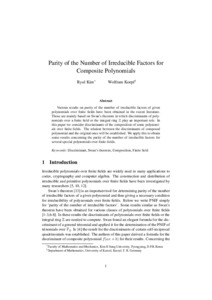 Parity of the Number of Irreducible Factors for Composite Polynomials